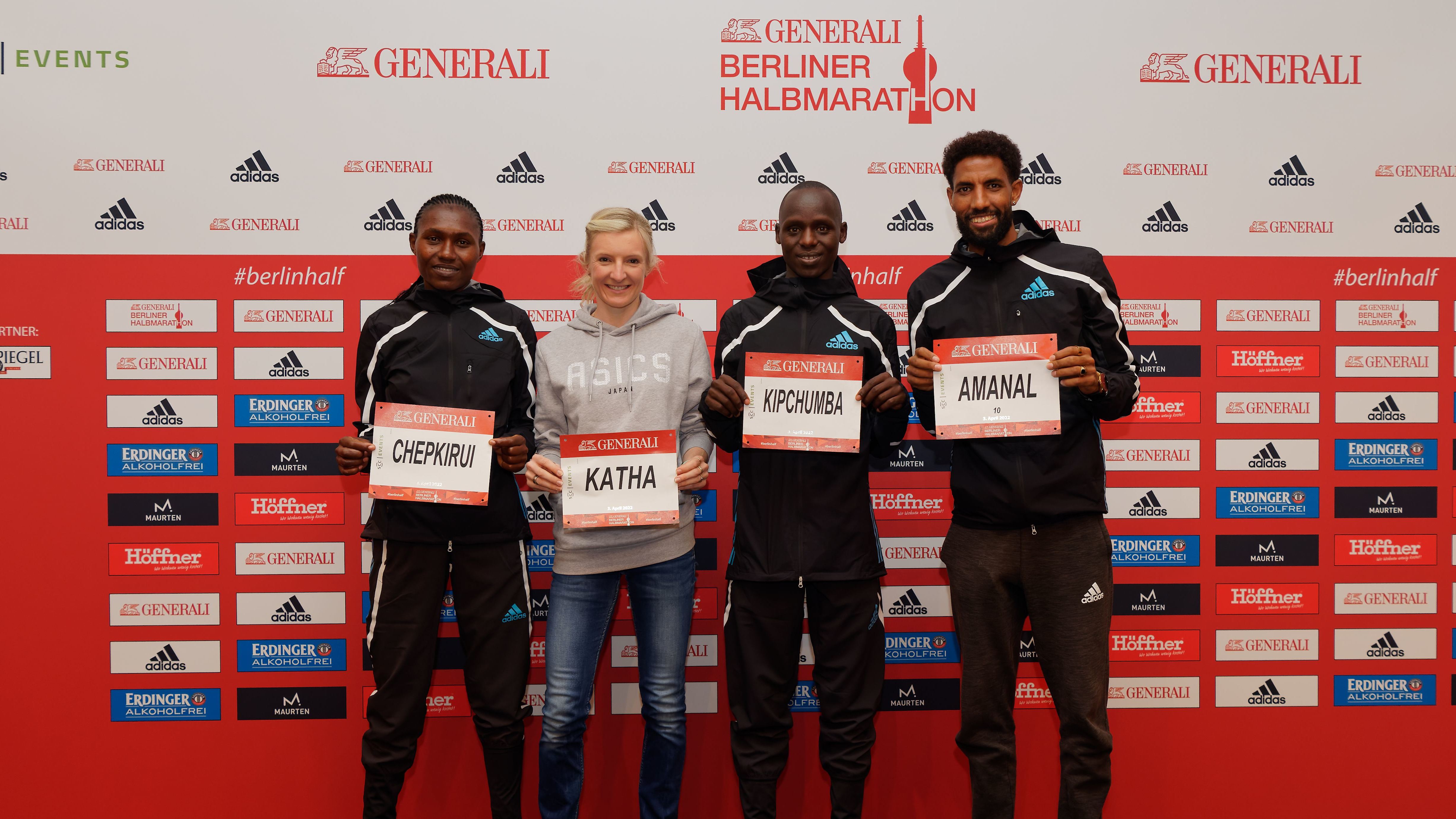 © SCC EVENTS_Petko Beier_Elite athletes at the GENERALI BERLIN HALF MARATHON

Germany’s major half marathon returns to its traditional spring date for the first time since 2019: The 41st GENERALI BERLIN HALF MARATHON will be started on Sunday. Due to the Corona pandemic the race had to be cancelled in 2020 and was then moved to August in 2021. A total of 33,336 athletes from 121 nations including all events have registered for the GENERALI BERLIN HALF MARATHON which features a start and finish near the Brandenburg Gate. Two of the fastest runners of all times head the start lists: Kenyans Abel Kipchumba and Sheila Kiprotich Chepkirui are the favourites. There are a number of top German runners in the field. Some of them compete for the Marathon Team Berlin, the team of the event organiser SCC EVENTS. While Kenya’s elite runners will target the course records Germany’s Amanal Petros wants to go for his own national record and become the first German to break the hour barrier on Sunday.

The men’s race
Since the five fastest runners on the start list are Kenyans a sixth win in a row for them can be expected. When Abel Kipchumba won the Valencia race in October last year he became the sixth fastest half marathon runner ever with a time of 58:07. With this PB he is considerably faster than Berlin’s course record holder and fellow-Kenyan Eric Kiptanui, who established the current record of 58:42 in 2018. “It is my goal to break the course record on Sunday,“ said Abel Kipchumba.
Four other Kenyans have already broken the hour mark: Alex Kibet has a PB of 59:06 which he ran in Ras Al Khaimah (United Arab Emirates) four years ago. While Kibet is number two on the Berlin start list Joshua Belet (59:28), Josphat Kemei (59:32) and Geoffrey Koech (59:36) are the other three. It was back in 1993 when Germany’s Carsten Eich took the BERLIN HALF MARATHON with a European record of 60:34. As a national mark this record stood until last year. It was then Amanal Petros who improved the German record to 60:09 in Valencia. With this personal best he is the seventh fastest runner on the Berlin start list and could achieve a very good position. However it will be more important for Amanal Petros to break the hour barrier on the flat Berlin course. In the history of the event there is only one European athlete who has achieved this: In 2001 Fabián Roncero clocked 59:52 and at that time became the first European to run a sub one hour half marathon.

The women’s race
The women’s course record of the GENERALI BERLIN HALF MARATHON could be broken for the third time in a row on Sunday. In 2019 Sifan Hassan of the Netherlands ran 65:45. Then Kenya’s Joyciline Jepkosgei ran a brilliant 65:15 in August last year. Now it seems possible that this record will fall again. Sheila Kiprotich Chepkirui leads the Berlin field. Within the last six months the Kenyan improved her personal best twice. First she ran 64:54 in Valencia in autumn, then she became the seventh fastest half marathon runner ever in February in Ras Al Khaimah with 64:36. Her latest improvement is very promising and she will be the favourite for the GENERALI BERLIN HALF MARATHON.  However two fellow-Kenyans could challenge Sheila Kiprotich Chepkirui on Berlin’s fast course: Irene Kimais and Joyce Chepkemoi have strong personal bests of 66:03 and 66:19 respectively. There are a couple of German runners who could do well on Sunday. Katharina Steinruck    is the fastest national entrant with a PB of 70:05. She will try to break 70 minutes on the fast Berlin course. Deborah Schöneborn is a Berlin runner, who competes for the team of the organisers, Marathon Team Berlin. While Deborah Schöneborn’s personal best currently stands at 71:37 she ran surprisingly well at the Olympic marathon last summer when she finished 18th in Sapporo. The race on Sunday will be an important test for her next marathon, which will be in Hamburg later this month.

The Key Visual of the BMW BERLIN-MARATHON 2022